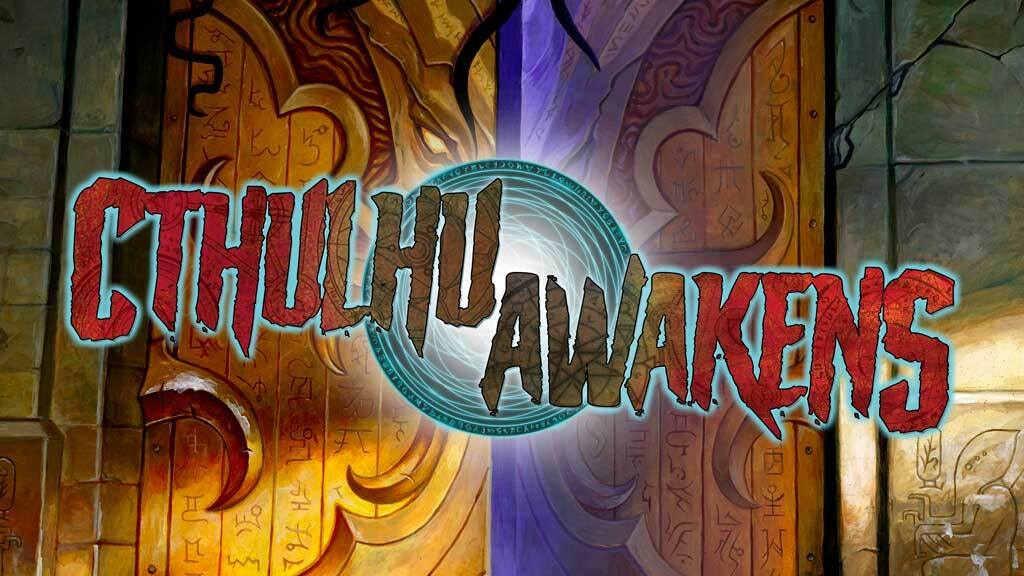 Spin epic Mythos tales of cosmic horror across the Weird Century in a complete, stand-alone roleplaying game powered by the AGE System!

Latest Updates from Our Project:

Hello, backers! It’s a foreboding new year, not just in terms of weather or the relentless march of time, but in some unspeakable developments in the roleplaying game industry!

So let me assuage any fears: Cthulhu Awakens doesn’t depend on or use Wizards of the Coast’s open game license, and no “withdrawal” of any version of it, regardless of its legal validity, will affect the game. The same goes for all AGE games, including Modern AGE, the new edition of Fantasy AGE (preorders and PDFs coming in February—see our recent Blog Post here), or anything else using that system.

Now that we’ve talked about that bit of mundane horror, let’s move on to the eldritch scene. How is Cthulhu Awakens doing?

· I filed the Game Masters Kit for production, including its included book, Unexpurgated Texts.

· I made a last-minute revision to the equipment system. Cthulhu Awakens uses a modular system for weapons to let you design weapons across the Weird Century or use simplified versions.

· I got back a number of edited texts for upcoming projects, some of which further posts will detail.

· I finalized the text of the Cthulhu Awakens Quickstart, which features a WW2-era adventure called “The God Beneath the Tree.” I just need to sketch a map and do art notes and it will be ready for production.

· I also finalized the text of an unannounced enhancement: a scenario outline based on the Revelations of the Bacchae stream run by Ian Lemke! What are we going to do with it? Good question. Give the stream and other Cthulhu Awakens bits a watch over on YouTube with this handy playlist.

· While that’s been happening, we’ve continued to work on the interior and approve art as it comes in.

And on that last note, let’s look at some new art—and exchange our farewells until next time!


Hello, backers! Winter’s come to get me where I live, so I’m bundled up tight against it—a season made by our planet’s movements through the airless chill of indifferent outer space!—as I type what we’ve been up to:

· Steve Kenson has added new systems support to Cults of the Mythos, “beefing it up,” as I alluded to last month.

Just in case you missed it, the core rulebook has moved fully into art and layout—and there’s at least one unannounced item that’s been developed and is in editing. However, a lot of our work recently has been approving the large amount of art in the core rulebook.

Where other games have used the approach of literary tribute or genre mashup, Cthulhu Awakens begins with this premise: “What if we used the Mythos and its public domain elements as the core of a coherent game setting?” Sometimes artists have very set ideas about what Mythos entities ought to look like due to the long tradition of illustrating in this space, but in Cthulhu Awakens we have specific descriptions of entities, items, and phenomena and need the art to conform to those, especially where we’ve put our own stamp on things, such as in the industrial metamorphosis capabilities of shoggoths, or in our ghouls, who dream in two worlds.

I went into how the approvals process works in detail last month, so rather than rehash that, let’s just look at some of the art that’s come in. In some cases, pieces might be tweaked a bit before they’re part of the book. Things are looking good, at least in the context of cosmic indifference. Enjoy your holidays and the new year, and we’ll be back with more in January!

Developer Malcolm Sheppard returns with this month's update! But before we dive into the nitty-gritty, be sure to go fill out your Backerkit Survey's if you haven't already! We are still waiting on about 15% of you to get those taken care of, and we really do not want to miss anyone when it comes time to lock in your orders.

And if you were a $1 pledge who was saving your spot in the pledge manager, (because perhaps you weren't super keen on giving Kickstarter money last spring) make sure you switch to the pledge tier you had in mind or select any add-ons you wanted. Pre-orders/late pledges are also available through Backerkit. So, if you are coming across this update and thinking to yourself "dang, I missed it!" it's not too late!

Take it away, Malcolm!

Hallowe’en is done, and now we march into the unclassifiable months between bizarre holidays. What is this season? When did the apostrophe in Hallowe’en go away? Let us set aside these mysteries for this month’s update.

These are incremental progressions from last month, so they’re not so exciting, but in more engaging news, I’m approving art for the game.

The process for art direction at Green Ronin has a few moving pieces, but it basically happens like this.

1. The developer (me, in this case) creates a wish list of illustrations for the book. This is a combination of evocative pictures (I usually present our iconics in a situation actual Player Characters might be in), practical illustrations (such as a picture of an eldritch artifact or creature), and maps, when called for by scenarios. I usually attach them to the closest relevant header on a big spreadsheet, so the “Evil Doodad” header is accompanied by a description of said doodad.

2. The Art Director (Hal Mangold for most of Cthulhu Awakens) commissions artists, who draw preliminary sketches.

3. The developer goes over the sketches, checking them for adherence to the text, to the general creative vision of the game, and for individual quality.

4. The Art Director translates the developer’s comments into something the artists find useful. I know what I want, but not always how to describe it to pros, and Hal has a sense of what looks good, as is his purview.

Cthulhu Awakens presents some additional challenges because the game covers the whole span of the Weird Century, so illustrations have to match various historical periods as well—and of course, we want consistency with how various Mythos entities are depicted. I’ve included some near-finished pieces to give you a sense of it, but the real challenge has been devising our own esthetic take on the true icons of the Mythos: the “gods” we call Outsiders. I look forward to you seeing them. Cheers!

Just a quick note this morning to say that we encountered zero issues during the early "smoke test" for the pledge manager, and so all survey emails are going out now! If you have not received an email by the end of the day, be sure to check your spam folder.

Please respond as soon as you can so you do not accidentally forget and miss out! Filling out your survey promptly will let us know how many copies we need print and ship. We will keep the pledge manager open for address changes for the next few months, which should give you plenty of time to consider any add-ons you may want, but once the books are ready to be sent to the printer, we will be locking addresses and charging shipping.

Unfortunately, any unanswered surveys after we start shipping will be converted to a "tip" and we will not be able to fulfill your Kickstarter pledge.

Additionally, the Pre-Order store on Backerkit is live! If you know someone who missed this campaign, but still really wants the game, be sure to let them know! We will be shipping pre-orders at the same time as Kickstarter rewards.

We have two updates in one for you today! Our regular monthly update from developer, Malcolm Sheppard, and information about the launch of the Pledge Manager this week!

I recently had a back and leg injury re-assert itself and it’s kind of slowed me down this month, so unfortunately, I have less movement to tell you about than I’d like. Still, I’ve been plugging away at development, and here’s what I’ve got to tell you:

We also had a meeting this week where we discussed where exactly we’ll be taking the line, and we’ve made a few tentative decisions, but what do you think? After everything we’ve announced, what do you think we should we do next?

We finally have all the missing pieces in place and are starting the "smoke test" for the Backerkit Pledge Manager today! A smoke test means that roughly 5% of backers across all tiers will receive their survey later today, so we can make sure that everything is working as intended and catch any last-minute issues before the remainder of the surveys go out later this week. We are currently planning to send out all surveys on Thursday October 13th! Just in time for our ThursdAGE livestream (2pm Pacific time, on Twitch, YouTube, Facebook, and Twitter!).

Thursday is also when the Pre-Order store will go live, so any late backers or anyone else who missed the campaign will still have a chance to pick up the game at the crowdfunding campaign prices!

We will be sure to post another update on Thursday when all systems are go.